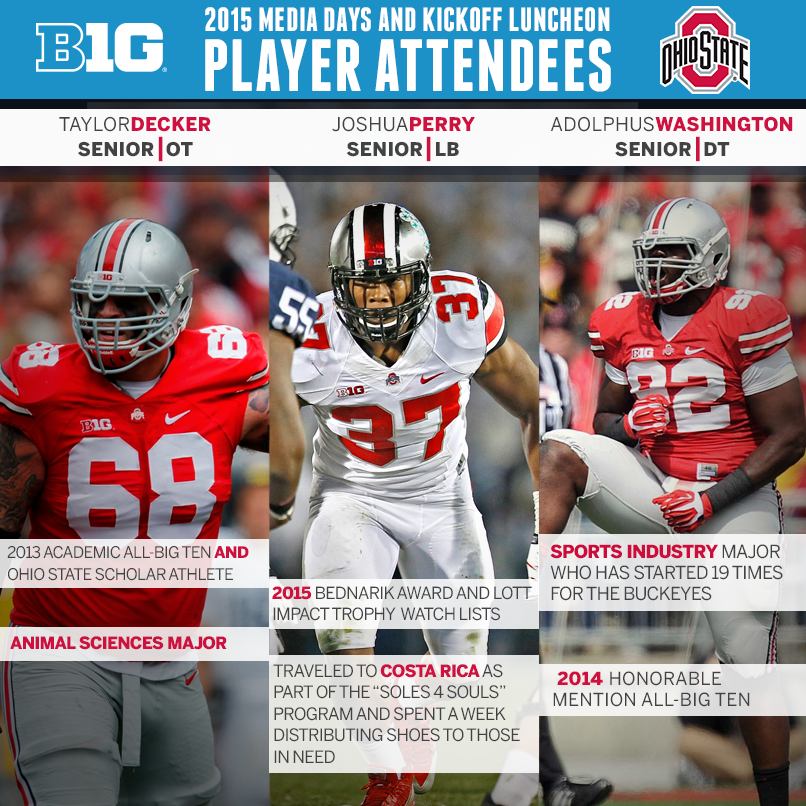 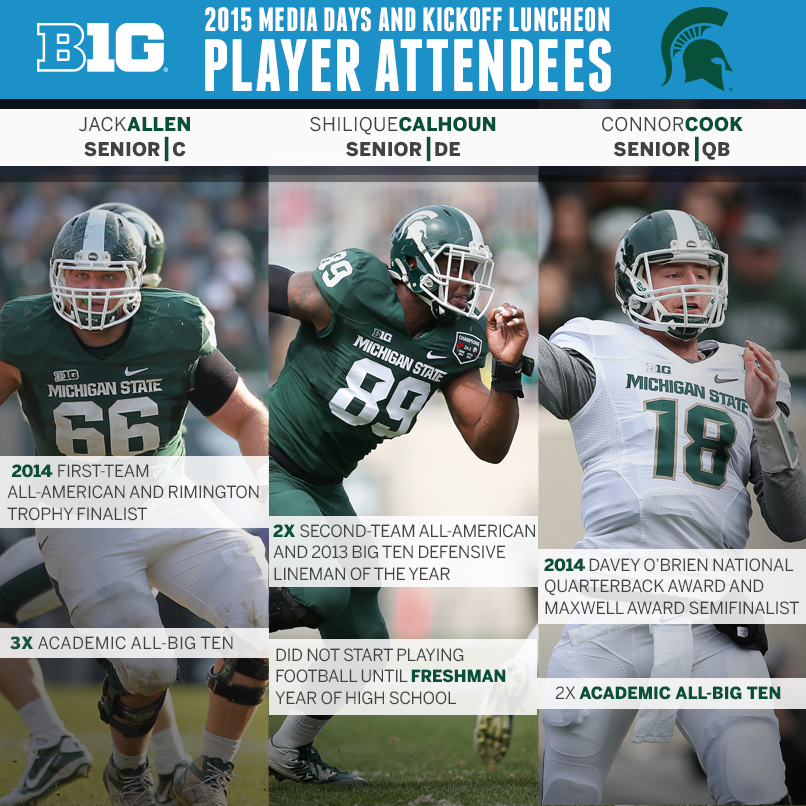 The Big Ten East is loaded with two preseason Top 10 programs: Ohio State and Michigan State for 2015. Further, Penn State is a program coming off probation, with renewed enthusiasm lead by a talented junior quarterback Christian Hackenberg back in 2015.

Michigan welcomes a new head coach, with former Wolverine quarterback Jim Harbaugh, back in college football, after four seasons in the NFL. The Wolverines are 12-12 over the past three seasons in Big Ten play. It has been 11 seasons, since the Wolverines last won a Big Ten football title.

But, the conference has a different feel today, with seven programs in the East and seven other programs in the West. The path to the title is far different today. Ohio State is the defending National Champion, winner of the first College Football Playoff.

The path to a Big Ten football title is no longer like 1981, 1985, 1990, 2002, 2004 and the one game short path in 2009, that the Iowa Hawkeyes nearly pulled off, falling in OT in Columbus. It comes down to a final game, between the two corresponding division winners. Something the Iowa Football program has not come close to obtaining over the past four seasons.

Since 2011, the Big Ten Championship Game has determined the sole football champion of the conference. The first three seasons, the winners of the Leaders vs. Legends battled for the title. Last year, the East vs. West unfolded with Ohio State winning for the first time, under head coach Urban Meyer.

Who takes care of business in 2015 in the Big Ten West?

October will be very interesting in Big Ten West play, as Wisconsin plays both Iowa, then at Nebraska to kickoff their 2015 Big Ten schedule. Nebraska travels to Illinois, before hosting the defending division champs in Lincoln. The 2015 contest will be the first meeting, since Wisconsin's 70-13 win in the 2012 Big Ten Championship Game in Indianapolis.

The Hawkeyes actually were in the division race heading into the final two games at Kinnick Stadium last year, but lost 26-24 to Wisconsin, then lost 37-34 in OT to Nebraska to finish 4-4 in the Big Ten West.

Defense is often the key to success in the Big Ten. The top programs generally rank high in defense. Defense often fuels programs like Ohio State, Michigan State, Wisconsin and Nebraska, the four programs that have played in the Big Ten title game over the past four seasons.

One program that will likely build success off their defense in 2015 is the Minnesota Golden Gophers. Coach Jerry Kill enters his fifth season at Minnesota, coming off his first winning Big Ten
season at 5-3. However, the Golden Gophers have not beat Wisconsin, since 2003, falling 34-24 in Madison, last season.

The Golden Gophers offense must replace six starters, including their top rusher and four of five top receivers. The mix of ball control, defense and special teams will be the formula for the 2015 Gophers.

The Golden Gophers open the 2015 season on Thursday night in TCF Bank Stadium against a Top 4 team, with the TCU Horned Frogs coming to town. The Big Ten schedule will be a taxing as well, with a Big Ten game back to back on the road at Northwestern and Purdue, followed up with a Big Ten home opener vs. Nebraska. The out of division games are at home with Michigan, followed up with a game at Ohio State. The Golden Gophers travel to Iowa City, then finish of the Big Ten campaign with Illinois and Wisconsin at home.

Northwestern has fallen on tough times with back to back to back 5-7 seasons under Pat Fitzgerald, who is entering his 10th season as head coach in Evanston. This was after a 10-3 season in 2012, with a 34-20 Gator Bowl win over Mississippi State. 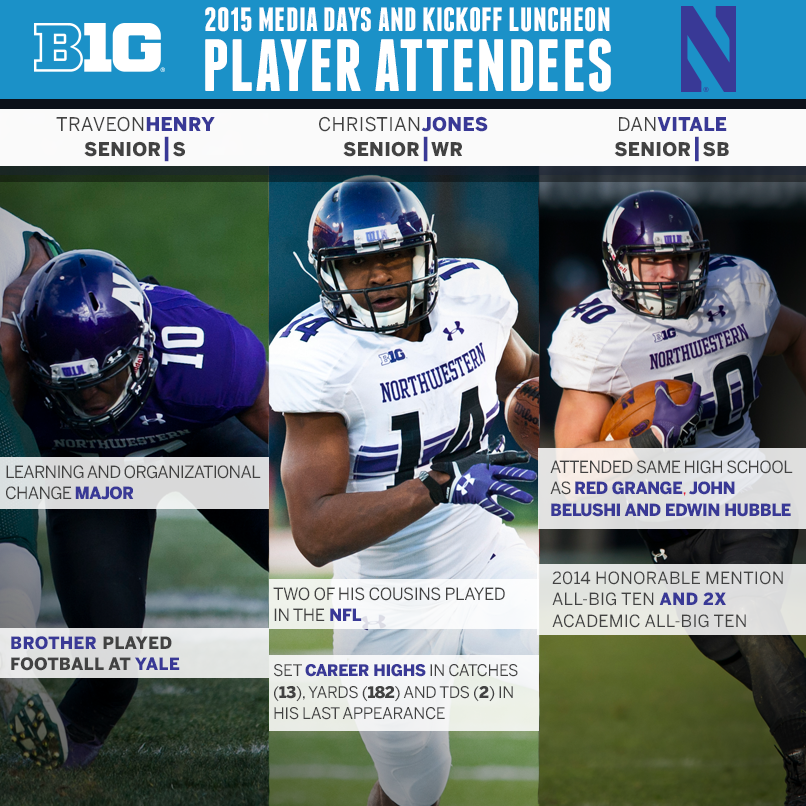 Six starters are back on offense in 2015, including their leading rusher on the ground. But, the Wildcats are the only Big Ten West program, who have a question on who the #1 quarterback will be in 2015?

The offensive line has two new starters and was not highly regarded in 2014. The defense returns eight starters, but special teams are not highly regarded and the leader of the linebacker unit, Chi Chi Ariguzo has departed, leading questions in this unit for 2015.

The Wildcats open the 2015 season with Stanford coming to Ryan Field on Saturday of Week 1. Northwestern also travels to Duke in Week 3 of the 2015 College Football season.

Illinois is coming off their first bowl season, along with a win over Northwestern, under fourth year coach Mike Beckman. The Fighting Illini return junior QB Wes Lunt, along with seven other offensive starters. The offensive line will have to do a good job protecting their quarterback.

Injuries are always a part of the game, and the Illini lost sophomore WR Mike Dudak to a knee injury during spring drills. Others will need to step up now in 2015.

The Fighting Illini return seven starters on the defensive side and have brought in a new co-DC Mike Phair, from the NFL. 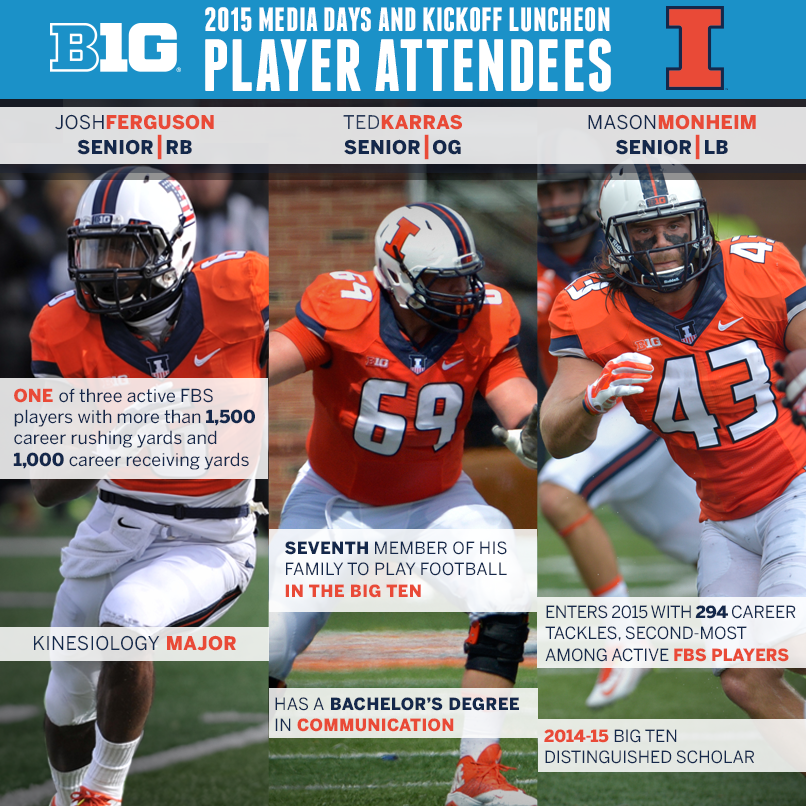 Special teams should be decent heading into 2015, as well. The Fighting Illini face a challenging Big Ten schedule with a trip to Penn State and a date again with Ohio State. The Illini have a road trip to Tobacco Road and a date with North Carolina in the non-conference.

Lunt is the only letter-winner back at quarterback in 2015. So, durability will be very important for the former Oklahoma State quarterback, who has yet to complete a full season.  First year players back up the talented quarterback for the Illini.

Purdue enters their third season under coach Darrell Hazell. The Boilermakers are 1-15, with a 38-27 road win over Illinois last season. Otherwise, there continues to be a lot of work for the Boilermakers. 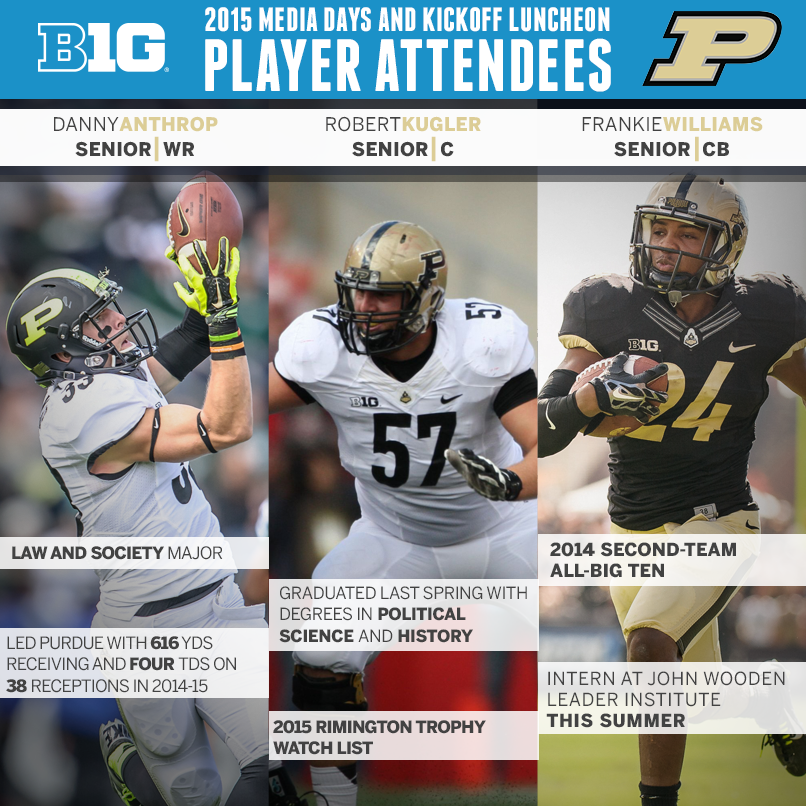 Eight starters return on offense, with seven starters back on defense. Special teams should be experienced, as well, for Hazell's third season.

The Boilermakers open the 2015 season on the road at Marshall on Sunday of the opening weekend. In Week 3, Virginia Tech comes to West Lafayette for another non-conference game. Indiana State and Bowling Green are the other two non-conference games in '15.

The Big Ten season opens with a road trip at Michigan State, then Minnesota comes to West Lafayette, followed by a road trip to Wisconsin. The Boilermakers will be battle tested in the first half of 2015.
Posted by My alias is Rob Roy at 5:26 PM