January 4, 2009: Kirk Warner and Darren Sproles in the NFL playoffs

Yesterday in the NFL, it was nice to see former Cedar Rapids Regis prep and University of Northern Iowa QB Kirk Warner back in the NFL playoffs for the first time, since 2002.
Warner and his Arizona Cardinals' teammates pulled out the NFC Wild-Card game over the Atlanta Falcons 30-24 yesterday in Phoenix.
The Cardinals held on to win the game, after a 14-3 start. 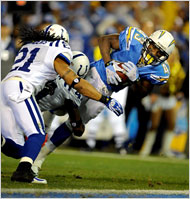 In the nightcap, the San Diego Chargers knocked off the visiting Indianapolis Colts and Payton Manning 23-17 in overtime.

Darren Sproles, born in Waterloo, Iowa; stepped in for an injured LaDainian Tomilinson, scored the winning touchdown in OT to move the Chargers to the next round of the NFL playoffs. Sproles was hot most of the night, though he had a few turnovers.

Amazing game, when you think about the Chargers 4-8 start this season to finish 8-8 in the regular season, then host the Colts, who were 12-4 on the regular season.
It was nice seeing the former Iowa guys on Saturday in the Colts-Chargers game. The Colts' TE Dallas Clark and S Bob Sanders, #21 in the Sproles picture above, and OG Mike Goff and PK Nate Kaeding for the Chargers.
Next up today, the AFC Wild-Card: Baltimore Ravens at Miami Dolphins at 12 p.m central time on CBS, while in the night cap, in the NFL Wild-Card: Philadelphia Eagles at Minnesota Vikings at 3:30 p.m. central time on FOX.