Banners are up: One week until kickoff at Kinnick Stadium 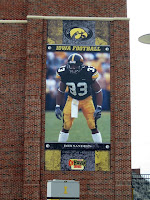 The University of Iowa is a week away from kickoff of the 2008 college football season. One of the many banners is now up and ready for next Saturday's kickoff.

Injuries were a problem for a young team in '07. It appears as many as three starters will be sidelined for the season opener, vs. the Maine Black Bears. TE Tony Moeaki, WR Troy Stross and G Dan Doering will likely be out. Moeaki missed a significant amount of time in '07, after going down in the Big Ten opener, at Wisconsin, in '07, and missing the rest of the season.

Iowa's defense, especially the front 7, appears to be the strength of the Hawkeye team entering 2008. The Hawkeye defense finished #12 in points allowed nationally, in '07. Another strength is sophomore punter Ryan Donahue, who set an Iowa record with 86 punts last year.

The real question in 2008 is how much the offense improves, including the offensive line. Iowa ranked #110 in offensive scoring, #92 in rushing, #94 in passing and #109 in total offense, all nationally, in '07. The offensive line allowed 46 sacks, sixth highest in the nation and first year starting QB Jake Christensen took a lot of abuse, both by opponents and by Hawkeye fans, who questioned why the 2nd string QB didn't see more snaps in '07.

Five questions that Iowa must answer in '08, if they are going to improve:

You can catch the Iowa opener, August 30th, with an 11 am kickoff on the Big Ten Network, from Kinnick Stadium. Iowa has finished in the Big Ten top division six out the past seven years... will 2008 make it 7 out of 8?