The coaches have announced that Michigan, Wisconsin and Ohio State are the front runners entering this season. RB Mike Hart of Michigan and LB James Laurinaitis of Ohio State are the Preseason Offensive and Defensive Players of the Year, respectively.

As a Big Ten fan, dating back to 1974, I think this season will be one of excitement and surprise, but overall, it will be tough for any one Big Ten team to rise to the top of the BCS race in '07.

USC clearly looks to be the best team entering '07 nationally. In the Big Ten, the front runners have been announced, but I wouldn't be surprised to see some upsets and disappointments on the horizon.

peace
Posted by My alias is Rob Roy at 11:28 PM No comments:

Former Iowa guard Pierre Pierce, despite 2 highly publicized legal run-ins, including time in prison in Iowa, is getting an opportunity to pursue his dream of an NBA career.

There is no question the former 6-4 guard for the University Iowa has some skills. But, will the character questions hold him back in his quest for the NBA?

peace
Posted by My alias is Rob Roy at 10:08 PM No comments:

3 remain today as Independents in all of College Football in Division I-A. Notre Dame is the #1 independent, along with Navy and Army.

I thought it would be interesting to see what the skyline was like 25 years ago. Pulling information from my 1982 issue of Street and Smith Official Yearbook for College.

Opening to page 114, coverage of the Atlantic Coast. There were seven ACC teams in 1982. Georgia Tech was not eligible for the championship in 1982 and would make 8 ACC teams.

The Independents in the Atlantic Coast region were 9 teams, not all Division I-A teams today:

Turning next to the Midwest on page 67. There are three independents in the Midwest:

By the way, the talk in the Big Ten was the ending of the "Ohio State-Michigan monopoly" in the Big Ten. During the 1981 season, Iowa finished first with Ohio State and won the trip to Pasadena and the 1982 Rose Bowl. Illinois was projected as the next team to watch.

Turning to the Big Eight on page 133, there were no mention of any Independents in this region, but the Missouri Valley Conference still existed with 8 teams: Wichita State, Tulsa, Indiana State, Drake, Southern Illinois, West Texas State, New Mexico State and Illinois State. fwiw

If you are keeping score:

Today: 3 schools, who were also Independents back in 1982

Some people say preseason polls are not right for College Football. We should wait for the season to unfold a bit, until we put up a Top 25 list (ie: BCS ratings, for example). Of course, polls are everything that is America it seems these days. We have a poll for everything, so why not a preseason College Football poll?


Why isn't Florida still #1, they haven't been beat by anyone yet? A look at last year's best entering the 2007 season. All the love is for USC, despite the fact no one has beat the Gators yet.

Scanning the Top 25 Division I-AA teams according to 2007 Street & Smith's College Football Yearbook... could we see a couple upsets in '07?

In 2005, Maine sprung a big upset on the SEC's Mississippi State. Last year, Northwestern and San Diego State were victims, as was Colorado, who fell victim to Montana State in a 10-19 loss to open the season.

Around the Big Ten, Wisconsin will host The Citadel, Purdue hosts Eastern Illinois, Illinois faces Western Illinois, Northwestern opens with Northeastern, while Indiana kicks the season off with in-state Indiana State. Around the Big 12 North, K-State hosts Missouri State, while Kansas will face SE Louisiana in '07.

Is Maine from the Colonial, Iowa's home opener in '08?

Comments on the Iowa rivals site today mentioned the Maine Black Bears as the August 30, 2008 opponent for the Iowa Hawkeyes.

Current Iowa Head Football Coach Kirk Ferentz was a former head football coach at Maine prior to his years in the NFL with the Cleveland Browns and Baltimore Ravens.

peace
Posted by My alias is Rob Roy at 1:51 PM No comments:

It's Summertime, so Old News is often New News 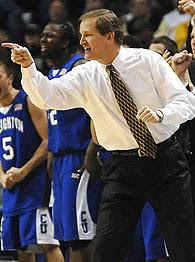 ESPN's recent story this month on Dana Altman's belated Spring Break Trip to Arkansas this April.
Glad to see you back in the Big O! Coach Altman!
peace
Posted by My alias is Rob Roy at 1:17 PM No comments:

USC clearly is #1 entering the Preseason

USC is the consensus #1 pick entering the NCAA Football season in 2007.
Beyond USC, I don't see a consensus for #2 through #5. Has there been a weaker group of 2, 3, 4, and 5 ever in College Football?
After watching Texas in 2006, it's hard to see LSU a clear candidate, with JaMarcus Russell gone and with the Oakland Raiders in the NFL? Will this really be LSU Coach Les Miles' year?
West Virginia has a very solid coach in Rich Rodriquez. They are clearly rejoicing that he turned down the Bama job. WVU is close to being a consensus pick for #1 in the Big East in 2007? With Phil Steele's 45th rated difficult schedule, maybe the Mountaineers are worthy, but I have a hard time putting them too high.
What about Michigan from the Big Ten? Can they beat Ohio State, despite the losses the Buckeyes will have to overcome in '07? Defense wins championships and the Wolverine defense have some players to replace, from a team that still seems to underachieve at times under Coach Lloyd Carr. Michigan last won a share of the MNC ten years ago in 1997. The fans in Ann Arbor are likely a little restless.
Texas has a nice young QB in Colt McCoy, but which Longhorn team will we see in 2007? The team that beat OU 28-10 or the team that lost at K-State 42-45 and at home vs. A&M 7-12? Nebraska narrowly missed upsetting the Longhorns too 22-20 in Lincoln and Iowa gave the Longhorns a scare in the Alamo Bowl 26-24 to close out 2006.
Where do the defending national champs figure in 2007? The Florida Gators were impressive in last year's BCS Championship vs. Ohio State 41-14. Coach Urban Meyer and the Gators will have to replace 5 starters on offense and 9 on defense and there #1 PK and Punter. Not an automatic resume for the Top 5 again.
No one currently see Virginia Tech in the Top 5, but the Hokies appear to be a Top 10 team and the best team likely in the ACC this fall.
Some like Wisconsin coming out of the Big Ten. The Badgers under second year coach Bret Bielema haven't visited a BCS bowl, since 1999, so are they ready for there first BCS coming out party this decade?
Louisville appears to be the highest rated team with a new head coach, with Steve Kragthorpe moving over from the University of Tulsa. They clearly are not a Top 5 candidate at this point, but return a talented QB in senior Brian Brohm.
Oklahoma and head coach Bob Stoops are always a popular choice for the Top 5. They will have to find a new QB again. They didn't finish '06 on top, with a surprise upset by mid-major Boise State in an exciting finish in the BCS Fiesta Bowl 42-43.
Tennessee and TCU are getting some props as a possible Top 10 team, but a Top 5 candidate clearly not.
It seems ever so clear, that beyond USC, there is no clear cut team. Parity appears par for the course in 2007 again.
It should be interesting 2007 NCAA Football campaign this season, after USC. Of course, when it comes to college football, clearly expect the unexpected. The conference races should be outstanding with many clearly a toss up this fall. We all remember that Ohio State vs. USC appeared to be on the horizon for the 2007 BCS Championship Game, then defeat was sprung on the Trojans and it turned out to be a different championship game.
More in 2007... we will see later on!
peace
Posted by My alias is Rob Roy at 12:23 PM No comments:

Happy Independence Day to you!

peace
Posted by My alias is Rob Roy at 9:42 AM No comments: