B1G Football 2011: A lot of interest in the first ever race for the Big Ten Title Game

The 40Th annual Big Ten Kickoff Luncheon unfolded this past week, as all 12 Big Ten coaches and 36 student-athletes meet in Chicago to discuss the 2011 Big Ten Football season, as division play and the first Big Ten Title Game will unfold, with the addition of Nebraska in the conference.

The Big Ten welcomed four new football coaches, along with Nebraska's Bo Pelini to the conference media day in Chicago for the upcoming 2011 season. We will have to wait until about mid-August on whether the Ohio State will be eligible for the inaugural Big Ten Title Game.

"Really in a nutshell for us, last year came down to how we handled close games. We dropped three games in November, total of 10 points. If you look at all of our losses over the season, about four points a game. If you contrast that to the year before, we ended up in the Orange Bowl. That was a year we did very well in close games." - Iowa's Kirk Ferentz

Will the Hawkeyes be one of the teams headed to the Big Ten Title Game in 2011? One member of the media indirectly was predicting it or simply didn't remember that Iowa vs. Ohio State isn't on the regular Big Ten schedule. The past two seasons the game has been played down the wire.

“We believe that the people of Iowa and the people of Nebraska are very much alike in many ways. Both believe in an honest day’s work, the importance of community and family, and both love college football and their football heroes.” - Nebraska's Dr. Tom Osborne

Iowa and Nebraska announce `The Heroes Game' where both institutions to use national stage to honor `citizen heroes,' provide support for charity. Heroes come in all shapes and sizes and Black Friday, the day after Thanksgiving will provide a football game to spotlight such.

Questions heading into August Camp in the B1G:

Iowa is a "wholesome" and "no-nonsense" program like Nebraska

The Big Ten Conference will hold its Media Day in Chicago on July 28Th and 29Th, including the 40Th Annual Big Ten Kickoff Luncheon. The SEC held its Media Day this past week to kickoff the beginning activities leading up to the 2011 College Football season. The Big 12, without Colorado and Nebraska, will kickoff on Monday and Tuesday.

The 2011 season will kickoff for the Big Ten on Thursday, September 1St in Madison.

Wisconsin is the reigning co-champion of the Big Ten and represented the Big Ten in the 2011 Rose Bowl, losing 19-21 to TCU. Excitement in Madison is high with transferring QB Russell Wilson, from North Carolina State, competing for the open QB position in 2011. Wisconsin could be the team to beat in the Leaders division in 2011? DiNardo like the Badgers and "window" of opportunity.

The Hawkeyes finished 8-5 in 2010 and haven't won a share of the Big Ten, since 2004. Will the young Hawkeyes make noise in 2011? Iowa will start 2011 with a new QB, as junior James Vandenberg takes over the reigns, with Ricky Stanzi, Iowa's first 3-0 bowl winner as a starting QB, moves on to the NFL.

Big Ten officially welcomes the University of Nebraska at Lincoln

The University of Nebraska officially became the 12Th member of the Big Ten Conference on July 1, 2011. The first official activity will be the 2011 Big Ten media day later this month in Chicago on July 28-29. 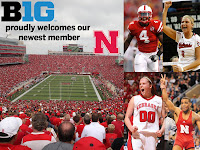