UNI and Creighton sit tied for 1st Place in the MVC

Creighton will host Illinois State to close out the conference play on Saturday on ESPN2, while Northern Iowa will host Evansville the same evening.

peace
Posted by My alias is Rob Roy at 7:20 AM No comments:

The Gazette highlighted today a schedule quirk in the Big Ten conference schedule for Iowa basketball for the 2008-09 season.

Before last Saturday's game with Northwestern, Iowa had played four straight weekends all on the road in the Big Ten. The result was four losses for Iowa. The Gazette reported that Iowa coach Todd Lickliter spoke to Big Ten officials about the schedule, but according to Lickliter he is still waiting for a reply.

“I question how that happens,” Lickliter said. “I just think that to let
your building sit empty for four straight weekends seems like a lot to ask of a
team and of a fan base. Although, they (Iowa fans) were kind of hungry to see us
play on a weekend and they showed up. “But I don’t want to try that
again.”

The Hawkeyes have two more weekend games at home this month. Iowa faces Purdue this Saturday and on February 22 Iowa hosts Michigan, then rap up February with one more road weekend game at Northwestern on February 28.

Oh! That darn Big Ten computer for scheduling does it again.

peace
Posted by My alias is Rob Roy at 7:53 AM No comments: 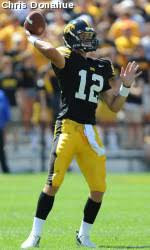 The University of Iowa signed 19 players for the recruiting Class of 2009 on Wednesday. Based on national rating services, like Rivals.com, the Hawkeyes class were high on 2 star players. Compared to other Big Ten conference teams, this was not considered a strong class, if you base it in on Star Power.
But, this is Iowa. Iowa football isn't quite heaven, when it comes to elite football programs, but the University of Iowa is a very competitive program in the Big Ten, despite being the smallest public university in enrollment among the ten Big Ten public institutions. 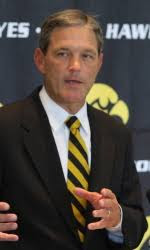 Iowa's head coach Kirk Ferentz enters his 11Th season as a head coach for the Hawkeyes in 2009. Over the past ten seasons, Iowa has played in five January 1St bowl games and two more Alamo Bowl games.
Iowa isn't sexy and this Class of 2009 isn't considered that way by those who observe college football recruiting. But, this appears to be a classic Ferentz class. Over the years, Iowa has found diamonds in the rough at TE. Iowa brings in two for 2009, after all-Big Ten TE Brandon Myers departs after the 9-4, 5-3 in the Big Ten, season in 2008. Iowa returns two solid TEs for 2009, who have solid experience.
Iowa filled needs, especially at RB, WR, TE, O-Line, D-Line and at CB. The player that got away, was at LB, but Iowa's first verbal recruit for the Class of 2010 is a LB prospect, who was named 2008 Gatorade player of the year, as a high school junior. Iowa returns everyone in the two deep at LB for 2009.
I have enjoyed Iowa Football, since 1974, as a ticket holder. Iowa has a lot of work to do between now and kickoff of the 2009 season at Kinnick Stadium on September 5, 2009. But, the future looks bright for the Iowa Hawkeyes. The Hawkeyes finished the 2008 season as a Top 25 program and they should enter 2009 in the Top 25, as well.
On Iowa!
peace
Posted by My alias is Rob Roy at 5:26 PM No comments:

The day has finally arrived for high school football athletes, with the first Wednesday in February. The *** star ratings will be discussed. Who succeeded, who failed, but the real questions will be answered this fall and over the next 1-5 years, since college football players, often redshirt, then complete up to four seasons of competition at the collegiate level.

Of course, some athletes will not even make it to campus, due to academic and other issues. But, they will be the talk of the town today.

peace
Posted by My alias is Rob Roy at 11:13 AM No comments:

To most in the USA, Super Bowl 43 is a match up between the AFC's Pittsburgh Steelers and the NFC's Arizona Cardinals. But, to most people in the State of Iowa, Super Bowl 43 is about native son, QB Kurt Warner, being back in the biggest football game of the season.
His home town paper, The Gazette, put together a 12 game spread in today's paper headlined:
C.R.'s Warner Returns to Football's Biggest State
SUPER AGAIN

Growing up, I have always been a Pittsburgh Steelers fan, behind the Green Bay Packers and others. I guess the Black & Gold didn't hurt, while Terry Bradshaw & company were stepping up and getting it done in the NFL. I don't recall ever rooting against the Steelers before in a Super Bowl. But, today, as an Iowan, I have to go with the local feel good story, with Kurt Warner.
It's great to see Warner get back to the elite game, after three outstanding seasons in St. Louis, ironically, the prior home of the now Arizona Cardinals. Warner played high school football in Cedar Rapids. He went up the road to the University of Northern Iowa, but didn't start until his final year, as a fifth year senior.
From Hy-Vee Food Stores to the Arena Football League to the National Football League, Kurt Warner has clearly been a Cinderella Story. A win today leading his Arizona club over Pittsburgh could lead the way to a Hall of Fame spot for Warner in Canton. Another outstanding accomplishment, since no Iowa native sits in the NFL Hall of Fame.
Of course, today is about the game, a classic chess match between the defensive minded Pittsburgh Steelers and the offensive minded Arizona Cardinals.
Game Forecast:
Pittsburgh's defense is allowing six points more in the postseason, as compared the the regular season. On the flop side, Arizona's defense is playing stronger in the postseason. This should be a good game. Turnovers will be huge, as could special teams.
Here's to a great Super Bowl today. Hopefully, Kurt Warner will help his team bring home the Trophy.
peace
Posted by My alias is Rob Roy at 2:33 PM No comments: