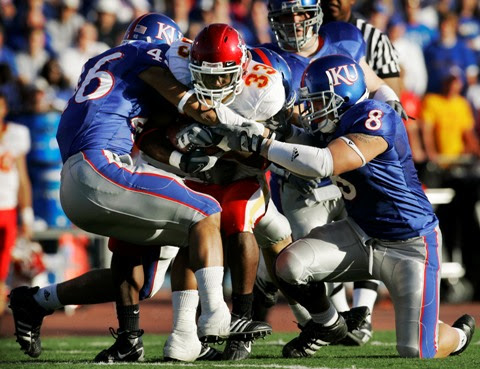 The New York Times is counting down the Top 120 teams in FBS, with Iowa State ranked #112 in the article titled The Quad Countdown: No. 112 Iowa State.
Last year, Iowa State's final ranking was #86.
2009 schedule:
peace
Posted by My alias is Rob Roy at 9:23 PM No comments:

SECsports.com has compiled the All-Time Final AP Football Poll. SECsports.com is the official web site of the Southeastern Conference. Eight of the 12 Top 25 teams were from the SEC.

Iowa Pre-Fight is listed tied at #79 with Yale in the All-Time Final AP Football Poll.

Iowa will face #70 Arizona in the non-conference this season in football.

As we enter the 2009 College Football season, who are the top 25 teams in FBS?

The SouthernPigskin.com doesn't see the Iowa Hawkeyes as one of the Top 25 teams in the nation entering the 2009 season. They have only two Big Ten teams in the Top 25, with Ohio State at #8 and Penn State at #17. Heck, Iowa was 1-0 vs. those two programs in the Big Ten in 2008, with Iowa's 24-23 upset win over the Nittany Lions. The Iowa win knocked Joe Pa's PSU team out of the BCS Championship picture last season.

After a strong 2007 season, will Illinois Fighting Illini rebound, after a disappointing 2008 season under coach Ron Zook? Illinois did get the monkey off their back against Iowa in '08. Iowa had won five straight and will have to wait until '11 until the two teams meet again in the Big Ten in football. Looking at early preseason polls, it looks like Phil Steele magazine is one of the few preseason forecasts projecting love for the Fighting Illini at #19.

How strong will the Wisconsin Badgers be in 2009? After two very solid season under coach Bret Bielema, his coaching was put under question by many after a up and down third season as head coach. Don't look for the Badgers any Top 25 lists at the season's start for 2009.

Another team that has some questions going into 2009 is the Michigan State Spartans. Not likely a Top 25 prospect to begin 2009, but coach Mark Dantonio is a coach who is earning respect among Big Ten opponents in East Lansing.

After a 55-0 loss to Iowa to close out the 2008 Big Ten season at home in the final game of the Metrodome for the Minnesota Golden Gophers, it's hard to think anyone would have the Golden Gophers a Pre-season Top 25 team, but a preseason Knoxnews.com site by John Adams does at #24. The site has three Big Ten teams in the Top 11 with Ohio State at #6, Penn State at #10 and Iowa at #11. Clearly, Mr. Adams didn't use the media guide deletion in his analysis.

We know Ohio State and Penn State will be the Big Ten's consensus Top 25 picks entering 2009. The Big Ten Conference should continue to become more competitive from top to bottom in 2009. But, Northwestern, Michigan, Purdue and Indiana will not be candidate for the Top 25 either.

At this point, Cidsports will use the following composite of teams for our 2009 Preseason College Football Poll...

Editor's note: We have a hard time placing Minnesota ahead of Illinois in the Big Ten, let alone Michigan State or Wisconsin. Though the QB situation at MSU and UW is yet to be determined. It should be an outstanding year from top to bottom in the Big Ten again.

In 1989, Coach J. Hayden Fry's Iowa Hawkeyes opened the season on new P.A.T. natural grass vs. Oregon. In 2009, Coach Kirk Ferentz's Hawkeyes will open the season vs. the University of Northern Iowa on new FieldTurf. Kinnick Stadium will unveil a new surface for the first time in twenty years.
Link from Hawkeye Sports site

The Gazette wrote an article on May 29 titled "PHOTOS, VIDEO: New-look FieldTurf unveiled at Kinnick Stadium" by Scott Dochterman.
A look at the old PAT field:

The construction at Kinnick Stadium this past May. Some fans wanted to see more logos on the field. The marketing department unveiled a jig saw picture earlier in the month piece by piece on the official web site for the football program.
The Hawkeyes will look to have a stronger performance than past upgrade seasons, like 2005, 1989 and 1972, when Kinnick Stadium made major upgrades to the stadium, including new press box and sky box seating (2005), returning to natural grass (1989) and putting in an artificial surface (1972).
Of course, improvements in the 1950s at Kinnick Stadium provided some outstanding dividends, as Iowa won two Rose Bowls, during that era. After finishing 5-3 in the Big Ten, 9-4 overall in '08, the Hawkeyes will work to move up the conference ladder this fall for Coach Ferentz and his staff. Iowa's last BCS appearance was after the 2002 season under Coach Ferentz and their last Rose Bowl appearance was after the 1990 season under Coach Fry.
peace
Posted by My alias is Rob Roy at 12:29 PM No comments:

Well, the Lakers will return to the NBA Finals again, after winning Game 6 of the Western Conference championship with an explosive 119-92 road win over the Denver Nuggets tonight.

Hopefully, the Los Angeles Lakers will get it done this time around in the NBA Finals! The Finals begin June 4Th!

I need to keep up with blogging, twittering, news, sports, etc.

Social networking is time consuming. Facebook, twitter, etc. Let alone the grind of everything else in life.

peace
Posted by My alias is Rob Roy at 1:52 PM No comments:

Kickoff to College Football 2009 is nearly 4 months away...

But, Athlon Sports is providing a sneak preview of their 2009 Big Ten Preview and their National Rankings for the 2009 College Football season.