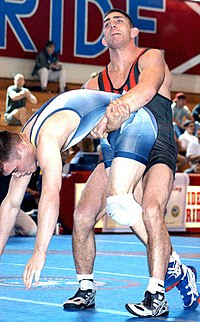 Greco-Roman Olympic wrestling in the middleweight class ends with protest, after Sweden’s Ara Abrahamian threw his bronze medal on the ground during the medal ceremonies.

"Disgusted with losing on points in the semi-finals against the later gold
medalist Andrea Minguzzi, Abrahamian tossed his bronze medal onto the wrestling
mat after receiving it and left."

I have really enjoyed watching Michael Phelps race in the swimming competition, but certain sports seem to allow the politics of competition spoil the Olympic experience.
The 29th Olympiad in Beijing, China certainly is showing the good, the bad and the ugly in the world of Olympic sports this August.
By the way, how popular will Olympic female wrestling be? I hear reported four American women hope to garner a medal in Beiijing.
peace